Evolution, as it is defined these days, merely concerns itself with Change over Time, not the origin of life.

But, change from what? There has to be life existing in the first place for it to Change over Time. (See my page: The Origin of Life: How did life begin? DNA could not have happened by chance)

Logically, evolution cannot be an alternative for creation (God creating life) until evolution concerns itself with the Origin of Life.

So, why doesn’t evolution concern itself with the origin of life? There is a very good reason: There is no proof for the commonly held belief that life started as a result of time and chance.

There is not any proof that life began without God’s help. There is speculation, conjecture and imagination, but no proof.

I will be told that many Christians believe in evolution. The church unfortunately has compromised and accepted, for the most part, what evolutionists teach as fact, and that is very sad. (Also see: Using the Dog-Kind of Animal to Disprove Evolution)

In the beginning, God created the heavens and the earth. Genesis 1:1

Genesis is my favorite book of the Bible, and Chapter 1 is my favorite chapter. This chapter describes the six-day process of God creating the heavens and the earth:

1 In the beginning God created the heavens and the earth. 2 Now the earth was formless and empty, darkness was over the surface of the deep, and the Spirit of God was hovering over the waters.

6 And God said, “Let there be an expanse between the waters to separate water from water.” 7 So God made the expanse and separated the water under the expanse from the water above it. And it was so. 8 God called the expanse “sky.” And there was evening, and there was morning– the second day.

20 And God said, “Let the water teem with living creatures, and let birds fly above the earth across the expanse of the sky.” 21 So God created the great creatures of the sea and every living and moving thing with which the water teems, according to their kinds, and every winged bird according to its kind. And God saw that it was good. 22 God blessed them and said, “Be fruitful and increase in number and fill the water in the seas, and let the birds increase on the earth.” 23 And there was evening, and there was morning– the fifth day.

27 So God created man in his own image, in the image of God he created him; male and female he created them. 28 God blessed them and said to them, “Be fruitful and increase in number; fill the earth and subdue it. Rule over the fish of the sea and the birds of the air and over every living creature that moves on the ground.” 29 Then God said, “I give you every seed-bearing plant on the face of the whole earth and every tree that has fruit with seed in it. They will be yours for food. 30 And to all the beasts of the earth and all the birds of the air and all the creatures that move on the ground– everything that has the breath of life in it– I give every green plant for food.” And it was so. 31 God saw all that he had made, and it was very good. And there was evening, and there was morning– the sixth day. (NIV)

Filed under My Faith, Reasons Why I Believe in God

Using the Dog-Kind of Animal to Disprove Evolution

Using the Dog-Kind of Animal to Disprove Evolution

On this page, I use kinds of dogs as an example that animals are in distinct groups, such as dogs cats or bears, but that there is no overlapping between groups. Each group has a lot of varieties that are able to mate and produce fertile offspring: the definition of the term species.

Pictures of Varieties of Dogs, Including Wolves

Look at the pictures of the pretty dogs:

But, wait a minute! Look at all those pictures of dogs below. Hey, they all look different from each other, and they are all dogs. What is the deal? 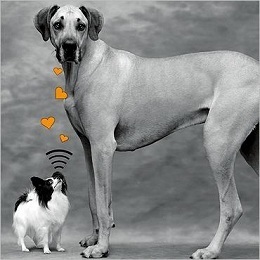 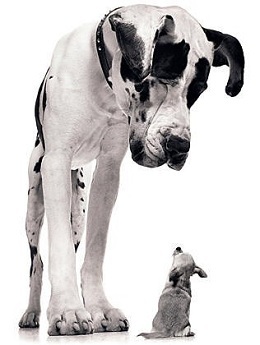 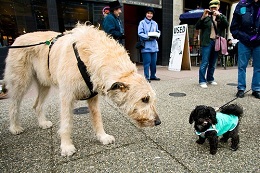 All Dogs are the Same Species

All of these dogs look very different from each other. They are different sizes and different colors, plus, they have different coat textures. But, they are all the same species: The Domestic Dog. How then can the grey wolf and the red wolf be different species? They look the same except for the color fur.

The deal is, we KNOW that all dogs are the same species because we know that they are the same species. Yes, you read that correctly. If a scientist came along and saw a poodle or a St. Bernard living in the wild, he would publish a paper on the new species he has found.

But, since we have lived so closely with dogs for hundreds of years, they would not dare try to fool us by telling us that a poodle is a different species than a St. Bernard. We know that dogs are dogs are dogs because the dog next door jumps over the fence to have babies with our dog. Then, the babies were more dogs.

But, we are told that all the little variation in groups of dogs (and bears, cats,etc) is a new species .

The Science of Taxonomy — Definition of Species

Carl Linnaeus is called the Father of Taxonomy. He developed the classification system that became what now called taxonomy. He was just trying to categorize the types of animals to see how many kinds of animal that God created.

But, evolution-believing scientists have taken his system of categorizing animals into the kinds that God kinds, and decided that it now shows evolutionary relationships.

Carl Linnaeus defined the word Species like this (paraphrase): If two animals can mate and produce fertile offspring then they are the same species.

He was trying to find the maximum number of animals that God created in order to have all the variations that we now have.

Dogs, Wolves, Coyotes, etc can all Produce Fertile Offspring Together

It is well known that different species of wild dogs can cross-breed and produce fertile offspring together. But, is the word cross-breed really accurate?

Cross-breed means to mate to different species together. Wolfdog and coydog are names of two of the cross-bred variations. Carl Linnaeus. who defined the term species defined it that if they can mate and have babies then they are the same species. What is the deal? Why are not dogs, wolves, coyotes, etc all the same species?

There is no Cross-Breeding between Dogs, Cats and Bears

The definition of species has changed just in my lifetime. Now, the term species is giving to every small various within a type of animal. Why? Because there is not enough evidence to prove evolution (because it is not true).

Dogs only make dogs, bears only make bears, cats only make cats. There is no cross-breeding between cats and dogs, or between dogs and bears, or between bears and cats. But, they are in the same Order Carnivore, meaning that they are related to each other evolutionarily-speaking. (again, by using the categories that Carl Linnaeus made to name the kinds of animals that God created.)

Dogs, Cats and Bears Cannot Mate, but are Related According to Evolutionists

Because evolution is called a fact (even though there is no proof) they have to make more evidence or people might quit believing it.

In reality, God created the basic kinds of animals: dogs, cats, bears, etc. Each basic kind of animal has the capacity for adapting to any ecological zone they come across. That is not evolution, that is good planning. That is only the innate genetic diversity that God programmed into all his creations.

Endangered Species are Not Species, Only Variations

A population of animals (or humans, too), who only interbreed with each other will start to look like each other. This family resemblance is what is miss-named a species. Then, since that species that only developed in one place is named an endangered species because it is not any place else.

In thirty years, after the isolated population of goldfish in my backyard pond has been only reproducing with each other, I am going to have an endangered species of goldfish. I am going go ask for federal funding to protect their habitat.

Evolutionists: What kind of animal gave birth to the first bat?

But, let’s just talk about evolution for a second. Evolution claims the gradual descent of all creatures from the “simple” cell (no cells are simple, they are incredibly complex, but I digress) Many, many variations occurring over time, and then some animal gives birth to the first bat. My question is which animal gave birth to the first bat?