What is Science? Is scientific fact determined by majority rule?

Truth is Not Determined By Majority Rule

Scientists used to examine evidence and then make conclusions. But, The field of science has been redefined to insist that everything have a natural explanation. That determines the desired conclusion before the evidence is examined. That process is anything but scientific.

I’m told repeatedly that most scientists are evolutionists so creation by God is not true. The fact is, most people who go into a field of science are evolutionists already, and they examine the evidence based on that mindset.

END_OF_DOCUMENT_TOKEN_TO_BE_REPLACED

My Christian Testimony: How I Came to Believe in God

Hi there! My screen name is “X-Evolutionist”, but please call me “X” for short. I’m a Christian married lady in my fifties. I’ve only believed in God for a very short time considering my age. This site is about the things I learned that got me to believe.

I Was Raised Without a Belief in God

I was taught that life on earth came about by a process of time and chance from as far back as I can remember. It was all I had ever known. There was no need for God in my philosophy as the world made sense this way. Even though my world made sense without God, I was still curious if he existed. I know now that we were designed by God to have a desire to know him.

Over the years, I would often come across Christians and I would ask them why they believed in God. I always got the same two answers: either “I’ve always believed in God” or “The Bible tells me so”. Neither of these explanations were compelling arguments for the existence of God as far as I was concerned.

However, my world was about to turn upside down…

I Met Some Friends Who Were Creationists

When I was over forty, I met some people who were Christians, and like always, I asked them why they believed that God existed. Surprisingly, they had something totally different to say. They said that they knew God existed because, according to them, the scientific evidence points to creation, and not evolution, and thus to a creator. Of course, I knew that they were ignorant, and I told them so.

But, they were very confident in what they believed. They basically dared me to read a book to see if they were right. I fought it for months, but, I ended up deciding that it wouldn’t hurt to read a book.

They Dared Me to Read A Book about Fossils

They loaned me a book about fossils. The book didn’t really have anything different than I had always been taught over the years in science classes, natural history museums and television nature shows, but it used some logical arguments that I had never heard before.

Fossils: Key to the Present
Duane Gish and Richard B. Bliss

They loaned me another book about the origin of life, how complicated life is, and how difficult it would be for life to be a product of time and chance. The book concludes that life had to be created by God.

Origin of Life
Richard B. Bliss

We in the United States are taught in public school that life was formed over time by chance. But, I have learned that this is not supported by scientific evidence.

I read yet another book. This book, like the others, concentrated on the scientific evidence against evolution and for creation. By the time I started reading this book I had an insatiable curiosity to read more and more books.

This book explained that events in the first eleven chapters of the book of Genesis in the Bible fit in with the scientific evidence of the world. For instance, this book shows that the fossil record was actually caused by a world-wide flood.

Most of the books I read were by scientists. This really surprised me because all my life I’d been told that evolution was “scientific” and creation was “religious”. Now, I was reading books by scientists who believed that “In the beginning God created the heavens and the earth” as it says in the first verse of the Bible.

I was particularly interested in the scientific information because I had always been interested in science. But, as the authors were Christians, they always wove the reasons they believed the Bible through the books.

As I was learning about the fossil evidence and geology, etc, I was also learning how these things fit with what the Bible said about creation, the flood and the Tower of Babel, among other things. I learned that the Old Testament was compatible with physical and biological evidence.

Meanwhile, I Started Going to Church – And Still Read More Books by Scientists

My insatiable reading continued and I read many books. During this time, I also began dating and then fell in love with one of my friends who initially told me why he believed in God. I started going to church with him. Before church he would rehearse with the other musicians that did the music for church and I would read my books.

At Some Point, I No Longer Believed In Evolution, but I Did Not Believe In God, Either

At some point into my reading I stopped believing that evolution was supported by the scientific evidence. But, on the other hand, I still did not believe in God or creation, either. This was a very confusing period of time for me. I also was reading the Bible by this time even though I did not believe in God. During church I would listen to the music and the sermon politely, I but never believed any of it – until one morning about nine months after I started reading that first book about fossils.

Suddenly, I Was Filled With the Holy Spirit

One Sunday morning during rehearsal I was reading one of my books and I suddenly started to cry. I didn’t know why. But I kept reading. I started to shake and continued to cry, but I kept reading. All of a sudden, I felt something that I can only describe as being filled by God. I suddenly believed everything. I believed in God, I believed that “In the beginning God created the heavens and the earth” and I believed that Jesus is the name of God.

My boyfriend was still rehearsing, but he could see that something was happening to me. When rehearsal was over he came to sit by me and we both cried during church. After church, the pastor’s wife came running over to me. It was obvious what was happening to me.

I Accepted Jesus as My Lord and Savior

At this point I couldn’t talk because I was crying and shaking so much, but she led me through a prayer and I accepted Jesus as my Lord and Savior and became born again as a Christian.

This all happened during nine months during the year 1996. Since then, I have kept reading more books. Each book gives me more and more confirmation of what I now know to be true.

Now I Want To Tell You Why I Believe In God

Now, I want to share the things I’ve learned with others. I want others to know that there is scientific proof that God exists.

I feel that God has a plan for me. I believe that He had me wait until now to believe in God so I would be passionate about telling others why I believe.

By the way, a short time after I became a Christian my boyfriend proposed marriage and we are now very happily married.

I live with my wonderful hubby, 2 great mutts, 1 African grey parrot, 2 cockatiels, 6 parakeets, two bunnies and a backyard pond full of goldfish. I am from California, but I live in Oklahoma City.

I don’t smoke, don’t drink, and do not eat animals. Oddly, my religious beliefs, came much later in my life and have nothing to do with these choices. I have worked in the field of civil engineering for many years.

I spend my time with my hubby and my pets, watching old movies, reading, crocheting, listening to music and telling people why I believe in God.

Here are some pictures of my pets:

Here are some pictures of my backyard:

Thank you for reading this far down!

How do scientists get surprised? They look at evidence after their minds are made up….

I just watched a short video and read an article about it. Check it out here:

Octopus snatches coconut and runs: An octopus and its coconut-carrying antics have surprised scientists.

(Thank you to Jen for posting a link to this article) 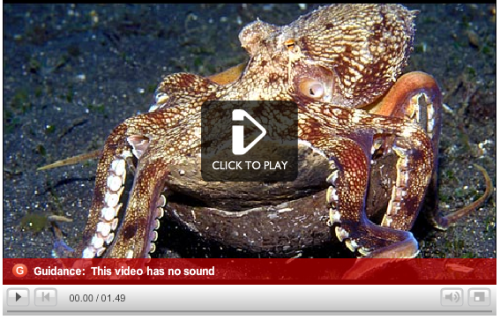 The scientists are “surprised” that an octopus can decide to take a coconut shell, run off with it, and use it for his house.

END_OF_DOCUMENT_TOKEN_TO_BE_REPLACED

Do any “real” scientists believe that God created the heavens and the earth? Yes, indeed!

I am told over and over that “real” scientists do not believe that God created the universe and everything in it. The thing is, that many scientists, and lay people like yours truly, believe that there is scientific evidence that God did that very thing.

But, there is a little secret: Most scientists who believe in God as creator would lose their job if they came out openly about their faith.

There are, however, many brave souls who do come out publically to show justification for their beliefs. Here is a list of those brave souls:

Creation scientists and other biographies of interest

This list is a work in progress as it is always being added to. So, some of the people on the list do not have their biographies up yet.

This is a list of the few scientists who have come forward, in this secular world, and admitted that they believe Genesis 1:1: In the beginning God created the heavens and the earth.

While I’m on the subject of scientists, I’d like to recommend a book:

In Six Days: Why Fifty Scientists Choose to Believe in Creation

This book has an essay by each of 50 scientists who discuss the evidence that God exists in their chosen field. It is a fascinating book, one that I had read many years ago. You can read it for free online here:

There is a sequel to this book entitled On the Seventh Day:: Forty Scientists and Academics Explain Why They Believe in God. (It’s not available to read for free online yet)

Is it unscientific to believe in God?

I didn’t believe in God for many years. I believed what I heard: that life began by a process of time and chance and then developed further from there. I have since found out that there is very little justification for that.

I came to believe in God because I read a bunch of books that convinced me that the scientific evidence actually points towards the existence of God. Life is too incredibly complex to be a product of time and chance.

If you do not believe in God, do yourself a favor and see if you are right. Look and see if there is actual proof for what you have been led to believe about how life began.

I would like to recommend a book. Each chapter is by a different scientist who gives evidence of things in his or field of science that cannot be explained by purely physical and natural means. You can read it for free, online:

In Six Days: Why 50 Scientists Choose to Believe in Creation